Nelson is our April 2022 Pet of the Month!  We met Nelson at the beginning of February for hind limb mobility concerns.  Nelson is an 11 year old Labradoodle.  He was able to walk 2-3 miles a day but over the course of a year, he was unable to maintain that distance.  His family came to Pawsitive Steps to see if rehabilitation could help!

At his initial exam, we found Nelson had muscle atrophy in both hind limbs, some myofascial back pain, and we suspected he had Geriatric Onset of Laryngeal Paralysis and Polyneuropathy (aka GOLPP).  GOLPP is a degenerative neurological disease that affects older dogs between the ages of 8-13 years. In dogs with GOLPP, dysfunction of the recurrent laryngeal nerve results in paralysis of the muscles responsible for abducting (opening) the arytenoids during inspiration, which limits the amount of air that can flow into the trachea and down to the lungs. This condition is exacerbated in hot, humid weather and during stressful situations. In most cases, the cause of this dysfunction is unknown. Other nerves may also be affected, resulting in hind limb weakness, and these signs may develop over several months to years.

Nelson is a very chill guy!  He only likes to eat Lean Treats when he is here, but he has to chase a few that are gently rolled across the floor first.  The underwater treadmill is just “okay” in Nelson’s view.  But he does become a bit more animated when he gets to watch the other dogs work on the floor while he is walking.  His absolute favorite modality here is laser therapy!  He lays right down and cuddles the entire time.

Since starting rehabilitation, Nelson is acting younger and is able to be more active at home too! 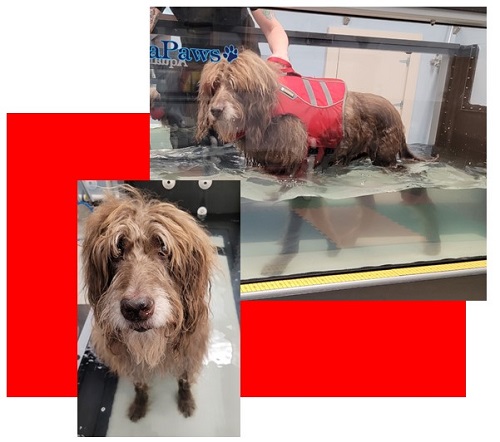