Meet Albus Dumbledog (aka Albus) our January 2022 Pet of the Month! Albus is a 4-year-old French Bulldog mix that we first met in February 2021. Albus suffered a disk herniation and had a hemilaminectomy surgery performed. Initially, he was unable to stand or walk at all following his surgery. Albus’s rehabilitation plan included a development of a at home exercise program. However, due to his severity of his hind limb paresis and neurological deficits it was very important for Albus to start out with no more than 3-5 minutes of exercises a day to prevent neurologic fatigue. If dogs with neurological deficits are worked past the point of fatigue, it can actually make their symptoms worse.

We saw Albus on a once weekly basis initially and worked on proprioceptive and body awareness exercises. As he progressed we focused on targeted strengthening exercises. Albus is a little rock star! He is now walking on his own and he enjoys walking in his pond and playing with his brother.  We love working with Albus and look forward to seeing how he continues to progress going forward. 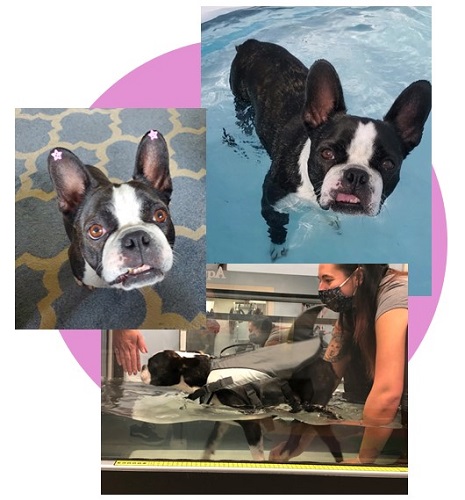