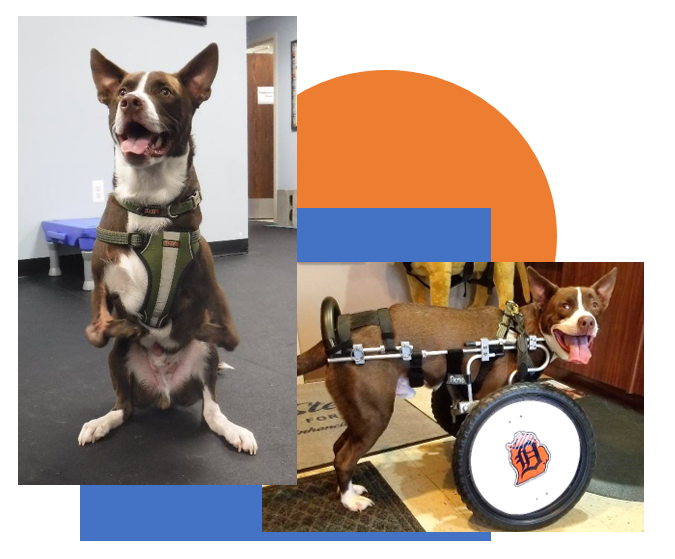 Meet Nemo, our August 2019 Pet of the Month!  Nemo was born with partial forelimbs with severe angular deformities.  He has dysgenesis (abnormal growth) in several bones in his forelimbs resulting in a severe pigeon-toed deformity.  We first met Nemo when he was only four months old and under the care of a rescue group.  Due to his forelimb deformity, he was unable to stand on all four limbs like a normal dog with a level spine.  As a result, he adapted to his deficiencies and would often sit upright like a squirrel or he would rest his head and chest on the floor with his spine arched quite significantly.  He walked by standing up on his rear legs and balancing his upper body, almost like a person, for a few steps at a time.  Obviously, his congenital limb abnormalities were going to create long term management issues for his neck, spine and rear legs.  Despite all of this, Nemo was one of the most friendly and happiest puppies we had met!

At that time, we gave Nemo’s foster family several simple exercises to help develop and strengthen his core musculature while protecting his open growth plates since he was still a young puppy.  We also needed them to help him rest onto a lap or furniture to learn to stand like a normal dog as we planned for his future care.  Nemo was still growing quickly back then, so we were unable to fit him for formal assistive devices in his early visits to the clinic.  More permanent support options, such as wheelchairs and orthotic devices when warranted, need to be measured after our patients are closer to their adult size.

Nemo did well with his exercises.  He was fortunate to find his forever family pretty quickly.  They had previously had a 3-legged dog and were immediately smitten with Nemo when they met.  Nemo brought his new family in to the clinic to learn more about his exercises and we set up a plan to proceed forward with some support for his front end so that he could walk more like a normal dog.   Once Nemo was near his adult size, we measured him for a custom front end wheelchair from Eddie’s Wheels.  He was fitted with his wheelchair and was a little unsure at first, but adapted to it really quickly!  He loves his cart and can be seen cruising around dog-friendly events and venues in his wheels!  We continue to see Nemo for regular veterinary spinal adjustments since he has a bit more stress on his spinal column due to the way he moves around when he is outside of his cart.