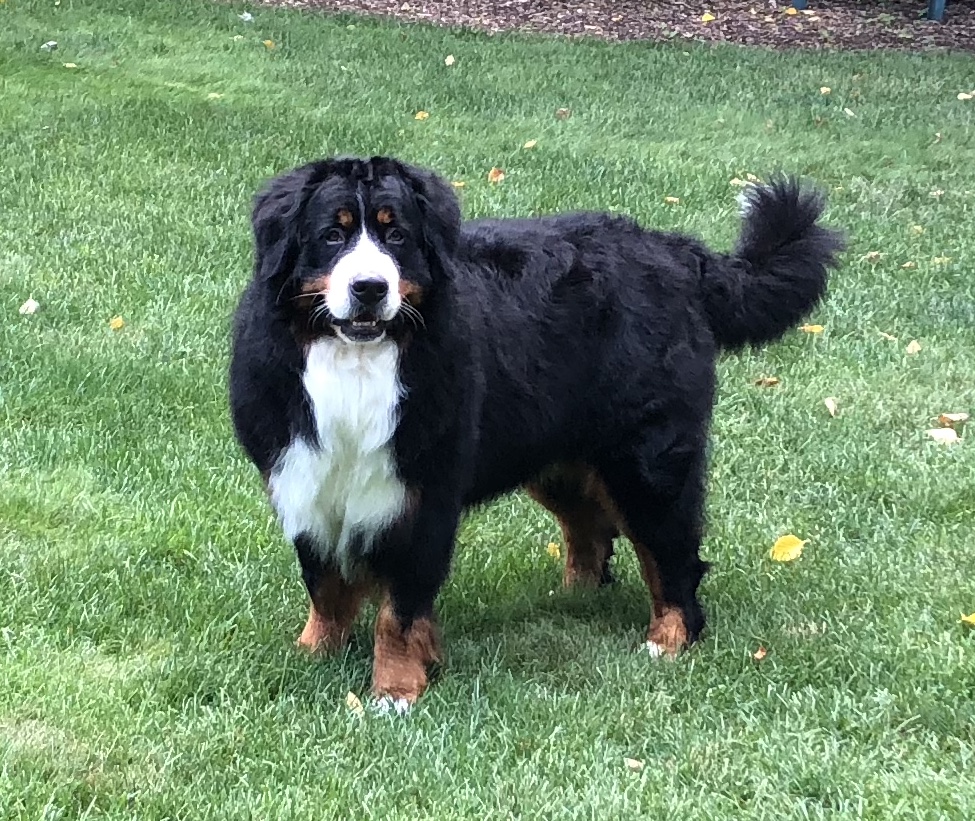 Meet Valentino, a 5 year old, male Bernese Mountain Dog, who is our February 2019 Pet of the Month.  Tino, as he is affectionately known, came to Pawsitive Steps Rehabilitation in May 2018 to start rehabilitation therapy following ventral slot neck surgery to relieve symptoms due to intervertebral disc rupture between C6-C7 (6th & 7th cervical/neck vertebra).  Prior to his surgery, Tino was an active dog and competed in conformation and obedience.

Tino had been having slowly progressing neurologic signs in the month prior to his surgery, which included ataxia (uncoordinated walking) and delayed proprioception responses in all feet.  Some of the neurologic signs improved quickly after surgery, but he had enough ongoing problems that rehabilitation therapy was definitely warranted.  In addition to the neurologic signs and his neck surgery, Tino was diagnosed with Laryngeal Paralysis when he was 2 years old and he had early arthritis in his hips and elbows.

Since Tino was having mild ataxia and had early arthritis in some joints when we met him, his rehabilitation program was tailored to his unique needs.  We would also need to pay attention to his breathing patterns during exercise because of his history of Laryngeal Paralysis.  Laryngeal Paralysis is a condition in which there is dysfunction of the recurrent laryngeal nerve resulting in paralysis of the muscles responsible for abducting (or opening) the arytenoids in the larynx (back of throat) during inspiration.  The decreased opening in the larynx limits the amount of air that can flow into the trachea and get down to the lungs. This condition is exacerbated in hot, humid weather and during stressful situations. In most cases, the cause of this dysfunction is unknown. Other nerves may also be affected over time, which can result in hind limb weakness and esophageal dysfunction. Diagnosis is made via a sedated laryngeal exam.  This condition is more commonly seen in older large breed dogs and is now called Geriatric Onset Laryngeal Paralysis and Polyneuropathy, aka GOLPP.  Tino is unique in that he was so young to be diagnosed with his laryngeal condition.

With all of Tino’s special circumstances, his rehabilitation program needed to address all of his needs.  His program would require slow and controlled exercises which would limit exertion and excessive panting due to his laryngeal problems.  His exercises needed to help strengthen his core muscles and also his limb muscles to help support his arthritic joints.  Additionally, we would need to use particular exercises to increase his body awareness and proprioception, especially with his rear limbs.  Tino loved to work and took to his exercises well.  He excelled in the underwater treadmill and obviously enjoyed is time in the water!

Tino recently returned to the obedience and conformation ring at this year’s Mid-Winter Dog Classic.  Even though he didn’t win any ribbons, he had a blast!  He even got to be center of attention and represented the Bernese Mountain Dogs at AKC’s Meet the Breed event.

Moving forward, Tino will need to continue his exercise program regularly to keep his muscles strong and support his hips and elbows.  Practicing his proprioceptive exercises regularly will be needed to keep his neurologic system in check, in case his laryngeal issues progress to involve other nerves over time like the older dogs with GOLPP.  Additionally, his family is quite aware to monitor his breathing when he is active because of his Laryngeal Paralysis, especially during walks in hot and/or humid weather.