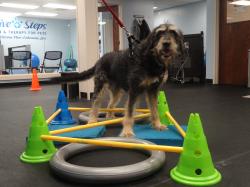 Meet Quigley, our March 2016 Pet of the Month!  Quigley is a 6 year old Pointer mix, who became acutely lame on his R rear limb after rough-housing with his housemates around Thanksgiving.  The cause of his lameness was pretty vague as all of his joint palpated normally and x-rays were normal when checked out by his veterinarian and also the orthopedic specialist.  He came to us for evaluation of a possible R iliopsoas strain and although his R iliopsoas muscle was a little tender, it didn’t match the severity of his lameness.

On presentation to Pawsitive Steps Rehab in early January, Quigley demonstrated an obvious, weight-bearing R rear limb lameness.  Physical examination revealed no abnormalities on palpation of his R rear limb joints, but some of his thigh muscles were tense on palpation (R gracilis, R sartorius, and R pectineus).  Additionally, Quigley was found to have a slightly sensitive R iliopsoas muscle, moderate R thigh muscle atrophy, moderate myofascial back pain from T6 to L7 (6th thoracic vertebra to 7th lumbar vertebra) with restricted movement of spinal motion units within the same regions of his spine.  Stance analyzer data showed that he was only bearing 7% of his body weight on his R rear leg (normally, dogs bear 20% of their body weight on each rear limb and 30% on each front limb).

Quigley was treated that day with Veterinary Spinal Manipulation Therapy (VSMT, aka “animal chiropractic”) to help facilitate more normal movement of the spinal motion units within his back.  Additionally, we treated his back and sore muscles with laser therapy.  Basic core strengthening exercises were prescribed as homework and a plan for weekly rehabilitation sessions was established.

Quigley returned the following week and was feeling much better.  His lameness was significantly improved and his weight bearing on his R rear limb was significantly better also (15% on the stance analyzer).  He has continued to progress nicely with his rehabilitation therapy sessions and is looking forward to getting back to lots of fun this spring.