Thankful to be a Rehabilitation Veterinary Technician 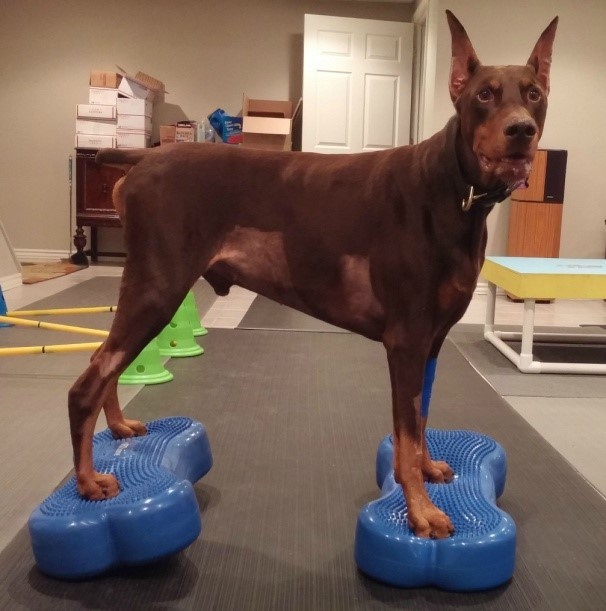 When I first began my career as an LVT, specifically a rehabilitation veterinary technician,  several people told me that my animals would now have the “veterinary curse”.  This meant that they would be plagued by strange illnesses, ruptured ligaments and a multitude of odd injuries that would often be difficult to diagnose and treat without a significant amount of diagnostics and complex medications.  My youngest Doberman, Dante has been the epitome of the “curse” and his health issues took a grave turn in July 2015 when he was suddenly diagnosed with immune mediated hemolytic anemia (IMHA).

It has been a rocky couple of months, but because of a strong team of veterinary professionals behind him he has survived.  I can tell you with no uncertain terms that had I not been a veterinary technician he probably would not be here today. I highly doubt that an ordinary pet owner would have been able to handle, recognize and treat him with the home care that he required.  Dante is on several medications one of which is Prednisone (a steroid).  In order to put him into remission the doses in the beginning of his treatment are quite high. Prednisone increases his thirst and leads to increased urination.  His urination schedule is approximately every 2-3 hours. Gratefully, I am able to bring Dante to work with me.

One of the side effects of Prednisone is muscle wasting. Dante was a strong, vibrant, 3 year old dog before the IMHA struck.  Within three weeks of being down with the IMHA and starting the Prednisone all of his muscle tone was lost.  He could no longer jump into the minivan or onto my bed. He was slow to rise from a down, and had trouble going up stairs. His stamina was gone and all he wanted to do was sleep. His scapulas, iliac crests and femurs were prominent.  He looked like an old, geriatric dog.   It had been several years since I had a geriatric dog in my home and I was now reminded of how my clients were dealing with their geriatric dogs on a daily basis.

It took almost 5 weeks before Dante was medically stable and I could start doing some rehabilitation work with him.  This once vibrant dog that used to be able to hold a sit-up-and-beg position for 20-30 seconds could barely hold a sit position on a tile floor without his hind limbs splaying out from underneath him.  I started slowly with basic foundation exercises (i.e. sit, down, stand).   Having him sit on a board helped him keep his feet underneath him which also helped him to maintain proper posture and utilize his core and thigh muscles. Performing these simple exercises using instability equipment increased the strength and balance challenge.  He is also walking over a series of low poles (cavalettis) to help increase his joint range of motion.  All of the exercises Dante is working on are similar to exercises to those that are used with geriatric, arthritic patients to help them gain strength and mobility.

My rehabilitation training has proven beneficial in treating my own dog. However, I am learning that I must have patience with the process. Rebuilding muscle tone has been destroyed by atrophy and steroids is not easy and not done quickly.  In my head I know that and I am good at communicating that to clients, however when it came to applying it to my own dog it did not seem to register. In the few weeks that he has been able to exercise, Dante’s stamina has increased.  He can now walk up to 2 miles per session where we started with just a walk around a short block. His posture has also greatly improved with his exercises and some muscle definition is returning.

Without my rehabilitation training, I would not know what to do to help Dante. I know that with my help he can return to almost normal function.  If he did not have the benefits of working with a canine rehabilitation practitioner I doubt that he would gain back muscle mass and in the process have the potential to injure himself further (i.e. ruptured cranial cruciate ligaments, etc.).