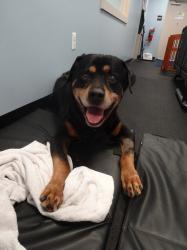 Assessment:
Rody initially presented to Pawsitive Steps Rehabilitation & Therapy for Pets for a sudden onset of weakness in all four limbs. He had to be carried in with slings because he was unable to support himself to walk. Attempts to stand only resulted in shifting to his other hip. He was able to voluntarily move his front legs to shift from lying laterally to lying sternally. He had a history of vomiting and diarrhea of a few days duration prior to coming to Pawsitive Steps and had been placed on metronidazole. The cause for his lameness was not definitively diagnosed by his primary veterinarian. Potential causes considered were metronidazole toxicity, fibrocartilaginous embolism (FCE), intervertebral disk disease of the cervical spine, neoplasia, or another unknown cause.

Plan:
Rody’s rehabilitation sessions focused on pain management and improving the neural communication to all four limbs through the use of acupuncture and cold laser therapy. Both of these modalities were started at his initial evaluation and utilized at all of his rehabilitation sessions. His metronidazole was discontinued in case toxicity was the cause for his clinical signs. When Rody came in for his first official rehabilitation session, his owner reported that he was able to sit up and switch sides that he was laying down on his own. By his second session, Rody was able to walk the short distance from the car into the clinic with the assistance of a harness. He was still weak and had to take breaks, but his limbs were slightly more coordinated. The cause of Rody’s tetraparesis remains undiagnosed as referral to neurologist was not pursued by client.  His rehabilitation plan is to continue weekly acupuncture, cold laser, homework exercises and reassess periodically based on his progress.